I kind of think of summer as reading season. It seems like everyone suddenly wants books to read for their holidays or to keep them occupied during all the extra time they plan on spending outdoors in the sun. So everyone is looking for a good book to read and to help you narrow down the list of possibilities here are the 5 books I loved this year. It’s not a list of books released this year, just ones that I read and really enjoyed.

This wonderful book centres on a village close to an (evil) enchanted wood that is protected from said wood by a wizard known as The Dragon (are you feeling all excited for the fairytale magic yet?). Every 10 years he visits the village and takes a girl back with him to his castle. No one in the village knows what he does with the girls just that when they return after the 10 years they are different and never stay in the village. This year he takes Agnie despite everyone believing he will take her more beautiful and skilled best friend, Kasia. But Agnie does something at the Choosing Ceremony that makes him feel he must take her.

Based on that much you’re probably expecting a Beauty and the Beast style fairytale romance but you ain’t getting it!

That wood I mentioned at the beginning is the real centre of this story. Its power is growing and it wants to consume as much of its surroundings as possible. Including people! There are creatures living inside it that torment and steal villagers from all areas around the wood. It separates one province from another and attempts to incite war between them which Agnie and the Dragon try to prevent. If you like magic and fantastical battles then this one is for you.

Asking For It by Louise O’Neill

This book follows Emma O’Donovan, an 18-year old girl from a small town in Ireland, who goes to a house party one night with her friends where something disgustingly awful happens to her. The book is more about how the characters deal with this event than the actual event itself.

One of the more interesting aspects of this novel is how unlikeable all of the characters are. Especially Emma herself who is very concerned with status, her looks and how they affect people. The only character that may be a bit likeable is her neighbour and childhood friend Conner though he annoys me a bit as well because he’s very interested in her romantically and is often telling her she’s beautiful. He’s focusing on her in a romantic physical way which is not something that helps her. But I guess he can’t help how he feels and other than that he’s a good guy.

RELATED: Asking For It by Louise O’Neill Full Review

Anyway, after this party, Emma is found by her parents dumped in front of their home her clothes askew, her underwear missing and burning in the sun. She has no memory of what happened to her but she soon finds out because a Facebook page titled Easy Emma reveals all. The page features photographs of her seemingly unconscious and 3 boys performing various acts to her. Many people are commenting on them, some of them people Emma knows, and what they’re saying is not good. A lot of them seem to be of the mind that these boys are just treating her they should be treated.

Suddenly everyone is against her and she tries to make it all go away (she doesn’t remember any of it after all) but it becomes too big. She ends up pursuing it legally. The book doesn’t follow the case exactly, it focuses on the emotional upheaval and strain on Emma and her family. It’s about how this act affects people and how they react to it happening to someone they know and by someone they know. How rape is so bad people try to pretend it doesn’t exist. How boys they know aren’t like that so the girl must be lying and afraid of being thought of as slutty. And if they can see her as a slut then it doesn’t matter what’s done to her. She’s just some slut.

The story is very emotional and hard-hitting but it’s an extremely important one that I hope will reach people far and wide.

I saw the play version last week in Cork and it was utterly amazing. The production was fantastic, they did a great job adapting it. It will be showing at the Abbey Theatre in Dublin soon, I highly recommend going if you can. 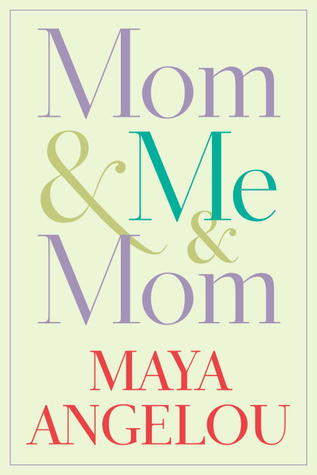 Mom & Me & Mom by Maya Angelou

I listened to an audiobook of this read by Maya Angelou, the best way to read a memoir in my opinion. (Check out John Cleese’s audio memoir as well it’s very funny)

In this memoir, Angelou explores her relationship with her mother which was pretty non-existent in the early years of her life but grew into something resilient and empowering later.

Her mother was essentially a stranger to her as a child, she chose to call her Lady instead of Mom which says a lot about the distance she felt. It also shows how she saw her as no ordinary woman but as someone to look up to, someone refined and feminine but still in charge.

This book really shows how love grows between people and how it makes us stronger. 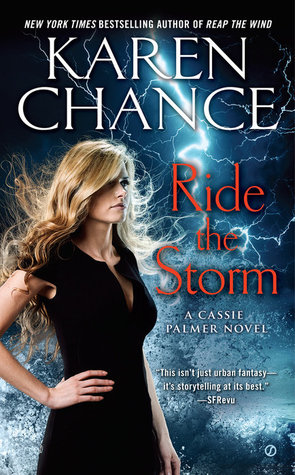 Ride the Storm by Karen Chance

This is the 8th book in the Cassie Palmer series, Touch the Dark is book 1.

I can’t go into too much detail about this one without spoiling the whole series since it’s a series full of cliffhangers (but lucky you, all the books are out so you don’t have to wait) and has an ongoing plot. The series follows Cassie Palmer, a clairvoyant who was raised by a gangster vampire after the death of her parents. She’s on the run from that vampire when she’s thrust into the position of Pythia, the supernatural world’s chief seer because it suits certain people to have someone they perceive as pliable in the position. She ends up the target of several factions, good and bad, and of some extremely powerful ancient beings.

The series is mostly based around Greek mythology with some of the more popular supernatural beasties thrown in for good measure. As opposed to a lot of urban fantasy, the individual books don’t really follow the monster-of-the-week formula but do have their own stories. There’s a larger plot that the entire series follows but it can be broken down into two main storylines that are 4 books each.

Chance knows how to create a story that grabs attention so this series is perfect if you want several books to binge read in the sunshine. 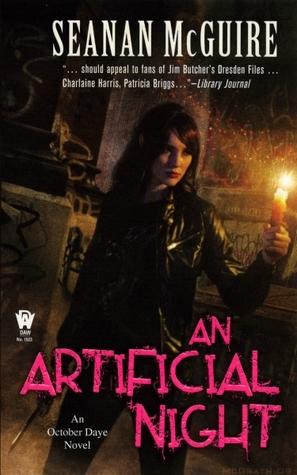 An Artificial Night by Seanan McGuire

This one is 3rd in the October Daye series but follows the monster-of-the-week style. Rosemary and Rue is book 1. There is, of course, a larger plot throughout but it isn’t really necessary to enjoy the book (I do recommend reading the whole series though it’s brilliant!). This formula is still very enjoyable to read cause it doesn’t leave you chewing at the bit for the next book (I don’t mind cliffhangers as long as I don’t have to wait years for the next book).

This series is based on fairies such as the Tuatha Dé Danann (the narrator pronounced Tuatha as “tootha” and drove me crazy!!!!) which I grew up with and just loved having them feature in modern adult stories.

Toby (October) is a fae halfling or changling who works as a knight and has to constantly prove her worth and strength to full-blooded fae. The ongoing plot of the series centers around her life in this position, she has many experiences and undergoes many changes.

This book focuses on The Wild Hunt which has been taking children, human and fae, to its realm to convert them to beings possible of joining the Hunt. They take some children connected to Toby and she chases after them to get them back.

McGuire is amazing at writing urban fantasy that is full of all the magic and action you expect but also fills it with real human emotion that is completely relatable despite the events being so fantastical.

There are moments in this book where Toby feels isolated and frightened that really resonated with me.

I’ve read around 50 books so far this year but choosing these 5 was actually pretty easy, I loved them that much! I’m off to continue rereading Reap The Wind as part of Jazzy June in the sunshine now. Thanks for reading and have a great day!

What books have you read this year that stand out from all the rest? What are you planning on reading this summer?